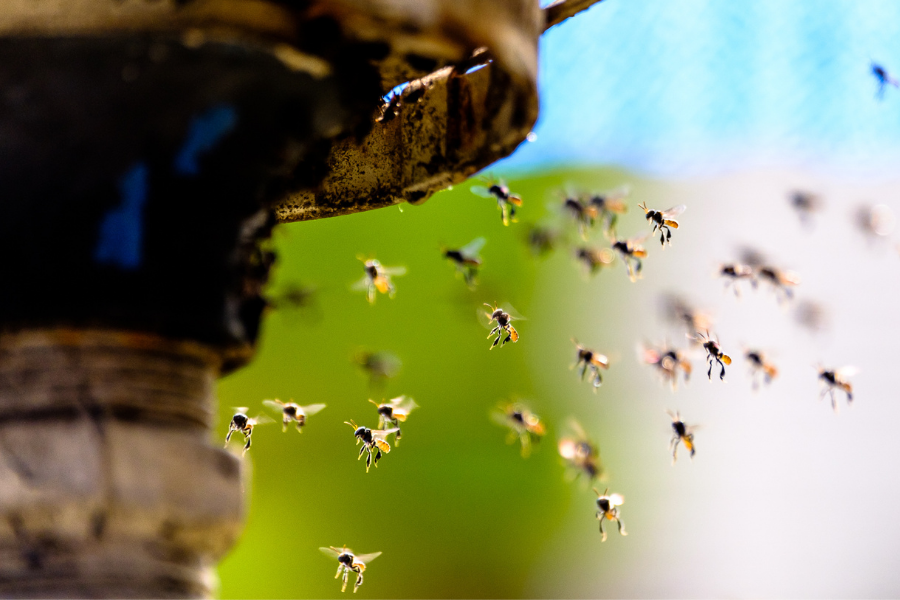 1. Stingless bees can be found in most tropical or subtropical regions of the world, but how many stingless bee species are there in Australia?

3. Which of the following is incorrect?

Stingless bees have no stings

Stingless bees will sometimes drink the sweat of humans

4. How do stingless bees defend their hives from intruders like hive beetles?

All of the above

5. How much honey does a hive of Australian stingless bees make in a year?

All of the above

7. What mathematical model does the spiral hives of stingless bees follow?

8. What shape is a beehive cell?

9. What is the approximate number of bees in a stingless beehive?

10. Splitting is a cost-effective way of establishing a new hive and one of the best gifts an experienced beekeeper can give to someone eager to start. What is this process called?

1. About a dozen. Of the nearly 2000 species of bees in Australia, about 14 are meliponines, or stingless.

2. Mexico. The bee god Ah Muzen Cab can still be found today in the ruins of ancient Mayan temples. For thousands of years, the Mayans and their ancestors kept and revered the living symbol of this deity, the stingless bee Xunan Cab (royal lady). Today, we know this bee as Melipona beechii. It is still widely kept in Central America but, sadly, its importance is on the decline due to the introduction of the honeybee from Europe and Africa.

3. Stingless bees have no stings. They have undeveloped stings that they don’t use. But they defend themselves by biting and injecting an irritating formic acid into their enemies.

4. All of the above. Stingless bee colonies can effectively defend themselves against invasion through a range of behavioural responses by the worker bees as part of a communal defence strategy.

5. Up to 1kg. Australian stingless bees can only make up to 1kg of honey a year compared with the close to 45kg that commercial honeybees can produce. But their honey is prized for its tangy flavour and medicinal properties.

6. All of the above. Australian stingless bees are great pollinators of Australian native flora. But they are also partial to some garden plants like daisies and have been successfully used to pollinate commercial crops such as brassicas, onions, melons and mangoes

7. Crystal formation. It was only recently proved that stingless bees make spiral, bullseye, intricate terraces, and irregularly shaped hives, according to the mathematical model similar to crystal formation.

8. Hexagon. With the hexagon (six sides), bees can use the least amount of wax to build their cells and yet have the most amount of storage space to store their honey. For instance, a circular cell is economical only if it stands alone. However, if you put circles together to make a tessellation, or a pattern of shapes that fit together perfectly, you will notice gaps and wasted space between them. The hexagon is not just the most economical but also the strongest. The pattern is so strong that less material is needed in the walls to support the load. Bees take advantage of this and make the walls of the cells 3,000 times thinner than a sheet of paper.

10. Eduction. This is a natural hive duplication method, which involves placing an empty box next to a boxed hive to persuade the bees to colonise the new box. This method can also be used to coax stingless bees into a box from a natural nest site in a tree or other cavity.

"The Billion Bees Foundation acknowledge the Traditional Custodians of the land on which we stand and pay our respects to Elders past and present.

Always was - Always will be."